Accumulating evidence suggests that the aggregation of islet amyloid polypeptide (IAPP, a.k.a. amylin) is associated with β-cell death in type 2 diabetes (T2D). IAPP is co-secreted with insulin by pancreatic beta-cells, and also works together with insulin to control the serum glucose level. In vitro studies suggest that IAPP is one of the most amyloidogenic peptide, which forms amyloid fibrils within hours at micromolar concentrations. However, no apparent IAPP amyloid aggregates are observed in healthy individuals where IAPP is stored in β-cell granules at milimolar concentrations for hours before being secreted to the blood stream. Therefore, physiological conditions of β-cell granules natively inhibit the amyloid aggregation of IAPP. 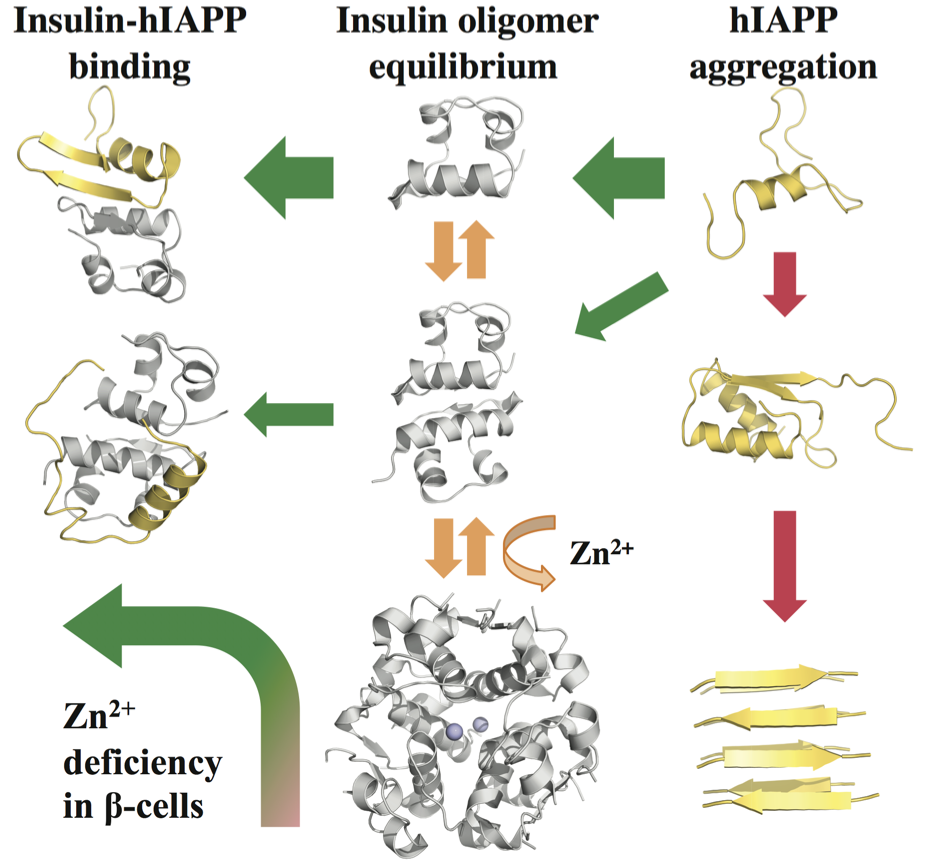 The cellular environment of β-cell granules is unique in its high concentrations of Zn2+, insulin and proinsulin c-peptide in addition to IAPP. C-peptide is the co-product of insulin synthesis, which connects insulin A- and B-chains in the precursor proinsulin and is co-secreted with insulin in equal molar. A high concentration of Zn2+, maintained by a β-cell specific zinc transporter – ZnT8, is believed to be important for the efficient storage of insulin: zinc coordinates the formation of insulin hexamers, which form crystals in the dense core of β-cell granules. ). We hypothesize that intermolecular interactions with insulin, zinc and c-peptide are important for the native inhibition of IAPP aggregation inside β-cell granules. Using state-of-the-art discrete molecular dynamics (DMD) simulations, we showed that both insulin monomers and dimers could bind IAPP monomer and inhibit IAPP self-association by competing with same amyloidogenic regions, subsequently preventing aggregation. Therefore, comparing to high zinc concentrations where insulin is insoluble in the crystal form, zinc-deficiency due to loss-of-function mutations of ZnT8 shifts insulin oligomer/crystallization equilibrium toward soluble monomers and dimers, which can efficiently inhibit IAPP aggregation and reduce T2D risk. Currently, we are trying to understand the effects of other granule molecules, including zinc, c-peptide, and their complex, on IAPP aggregation. 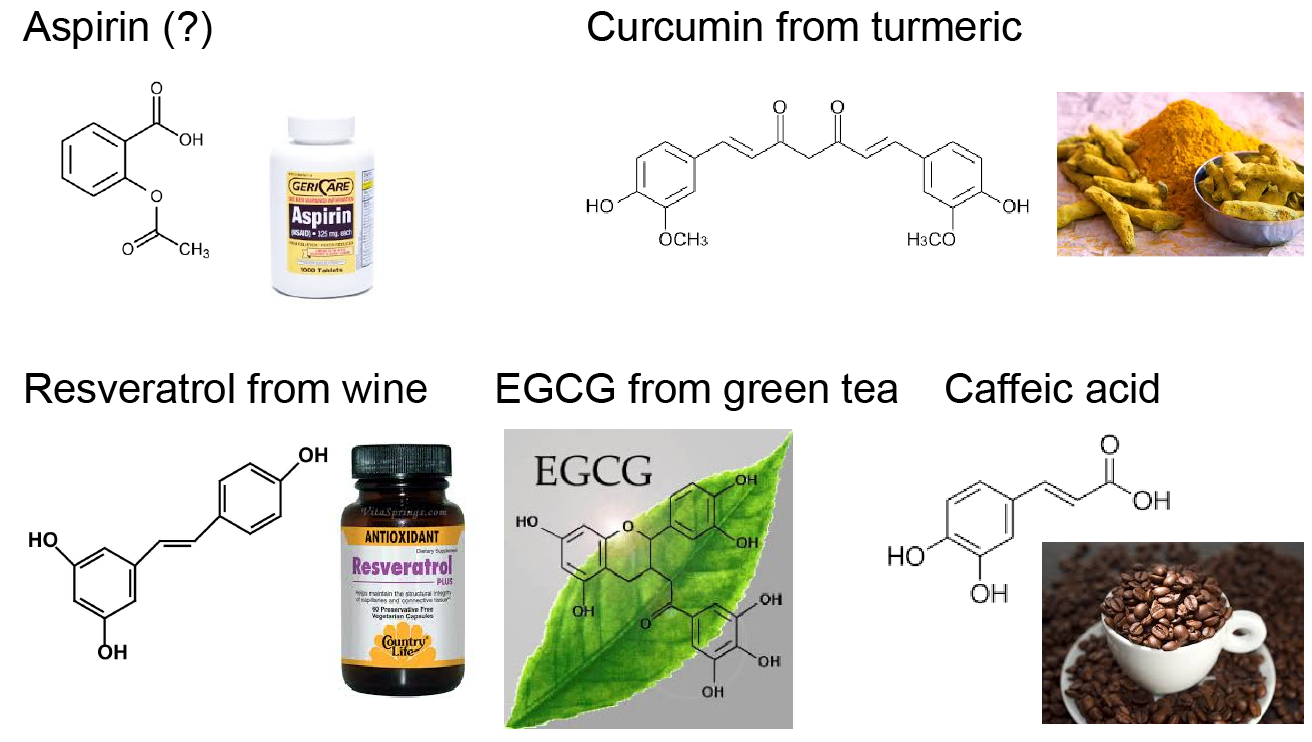 We are also actively exploring other approaches to inhibit IAPP aggregation. There are many reports about natural-occurring polyphenols, including resveratrol from grape, curcumin from turmeric, EGCG from green tea, and so on, which have inhibitory effects on IAPP aggregation. The advantage of these natural-occurring polyphenols is their low toxicity and the fact that they can be administrated for a long period of time. Understanding their mechanism is important for designing de novo anti-amyloid drugs to treat T2D. Additionally, nanomedicinal approach is also an attractive approach to serve as not only drug carriers but also as anti-amyloid agents themselves. Therefore, we are also looking for anti-amyloid nanoparticles and trying to identify their physicochemical determinants for optimal drug loading and amyloid inhibiting functions.

2021.7.21. “A Framework of Paracellular Transport via Nanoparticles-Induced Endothelial Leakiness”, co-authored by Myeongsang and Huayuan, is now accepted for publication in Advanced Science. Congratulations to the collaborative team!

2021.3.5. “Spontaneous Formation of β-sheet Nano-barrels during the Early Aggregation of Alzheimer’s Amyloid Beta”, a joint work by Clemson, Monash University, Ningbo University, and Southwest University, is now accepted for publication in Nano Today. Congratulations to Yunxiang and the collaborative team!

2020.12.24. “Amyloid Aggregation under the Lens of Liquid–Liquid Phase Separation”, first authored by Yanting, is now in press in The Journal of Physical Chemistry Letter. Congratulations to Yanting, who also became a new mother recently!

2020.2.10. “Thermo- and pH-Responsive Fibrillization of Squid Suckerin A1H1 Peptide”, first authored by Yunxiang, is now accepted for publication in Nanoscale. Congratulations to Yunxiang, now an Associate Professor of Physics at Ningbo University!

2019.8.4. Our collaborative work, “Inhibition of Amyloid Beta Toxicity in Zebrafish with A Chaperone-Gold Nanoparticle Dual Strategy”, is now accepted for publication in Nature Communications. Congratulations to Yanting and the team!

2019.5.28. The work “Amphiphilic Surface Chemistry of Fullerenols Is Necessary for Inhibiting the Amyloid Aggregation of Alpha-Synuclein NACore” first authored by Yunxiang Sun is now accepted for publication in Nanoscale. Congratulations to Yunxiang!

2019.4.26. Our jointed review paper with Drs. Thomas Davis and Pu Chun Ke on “Mitigation of Amyloidosis with Nanomaterials” is accepted for publication in Advanced Materials. Congratulations to Yunxiang!

2019.3.1. Our work on the aggregation of hIAPP8-20 via accumulation of helical oligomers, alpha-helix-to-beta-sheet transition, and beta-barrel intermediates has been accepted for publication in Small and featured as the inside Cover article. Congratulations to Yunxiang and Yanting!

2018.12.1. Combining both experiments and simulations, we showed that the early aggregation of full-length hIAPP features the accumulation of helix-rich oligomers, among which the nucleation of beta-rich structures and beta-barrels takes place. The work first authored by Yunxiang is now published in BBA – Molecular Basis of Disease.

2018.10.20. Our joint work with Monash University, Tongji University, and Qingdao University on inhibiting hIAPP aggregation and toxicity with Graphene Quantum Dots is accepted for publication in Nanoscale. Congratulations to Dr. Yunxiang Sun!

2018.10.1 Our combined computational and experimental work about the effects of Chiral Silica Nanoribbons on hIAPP aggregation is in press with Small. Congratulations to Dr. Yunxiang Sun and the collaboration team!

2018.9.15. Our joint work with Dr. Hugo Sannabria and Dr. Mark Bowen on identifying the weakly populated conformational states of PDZ1-2 of PSD-95 are published in Nature Comm. Congratulations to Bo!

2018.5.10. Our joint work with ARC Centre of Excellence in Convergent Bio-Nano Science and Technology in Australia and University of Warwick in UK on serum protein binding with hIAPP amyloid fibrils – i.e., the formation of amyloid corona – is published in ACS Nano. Congratulations to Yanting!

2018.1.29. Our work on uncovering the molecular mechanism of the cross-talk between Alzheimer’s disease and type-2 diabetes is now in press with ACS Chemical Neuroscience. Congratulations to Xinwei, Yang Ye and Yunxiang!

2017.10.1. Yunxiang’s paper on the Oligomerization and Fibrillization dynamics of peptides is accepted for publication in PCCP, where the aggregation free energy landscape is directly visualized!
Congratulations to Yunxiang!

2017.7.25. Our review entitled “Modulating protein amyloid aggregation with nanomaterials” is now accepted for publication in ES Nano. Congratulations to Bo and Yunxiang!

2017.7.19. Our work on the endogenous inhibition of IAPP aggregation in pancreatic beta-cells, first authored by Xinwei, is now accepted for publication in Chem. Comm. The work is also featured as the front cover article. Congratulations to Xinwei!

2017.6.26. Our review paper “NanoEHS beyond toxicity – focusing on biocorona” has been selected as the front cover article by Environmental Science: Nano.

2017.2.24. Bo Wang is awarded outstanding graduate researcher by both the department and the new College of Science. Congratulations to Bo!

2016.9.23. Our paper “Brushed polyethylene glycol and phosphorylcholine for grafting nanoparticles against protein binding” first authored by Bo and co-authored by Xinwei is accepted for publication in Polymer Chemistry. The work suggests that brushed phosphorylcholine polymer is a better alternative to PEG as the grafting agent of nanoparticles to achieve anti-fouling properties.

2016.8.26. The positions have been filled! — Our lab has an on-going opening for one or two postdoctoral fellows. The research project is supported by NIH to investigate amyloid aggregation related to type-2 diabetes and search for novel anti-amyloid therapeutic approaches.

2016.2.25. Our latest Small journal paper is highlighted in the current issue of Pancreatic Cell News. The work is the result of an international collaboration between Clemson University, University of Melbourne, St Vincent’s Institute of Medical Research, and University of Michigan.

2016.2.16. Dr. Ding is selected for an NSF CAREER award – “Multiscale Study of the Structure and Dynamics of Nanoparticle-Protein Coronae”.